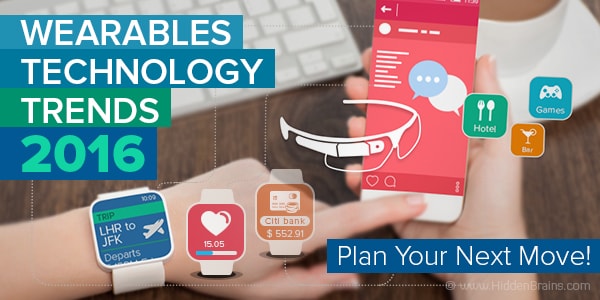 Wearable technology is pitted as the most watched sector, where businesses worldwide would be putting their money on in 2016. Trends indicate that consumers are gradually gravitating towards wearable technology with Accentureâs Digital Consumer Tech Survey 2014 reports revealing 52 percent of surveyed consumer (across 6 countriesâAustralia, Canada, India, South Africa, the United Kingdom and the United States) interested in buying wearable device such as fitness monitors.

Wearable devices as such comes in all shapes and sizes. From smart glasses to smart watches that double up as fitness trackers to smart clothing, smart jewelry, smart shoes, gadget gloves and virtual reality headsets like Oculus Rift – wearable technology trends are on an upwardly move.

This is possibly one of the most asked question for all keeping a close eye on the trends the wearable industry is showing and the how one can take the first-mover advantage to do business and stay ahead of competition. It is really necessary to know where the market is going, what opportunities exist for entrepreneurs in the coming years and most importantly, what factors is driving the wearable market.

Wearable devices, according to ABI Research is pitted to be a $50 billion market by 2017, and market trends have been indicating the direction the wearable market is heading to. Some of the many reasons can be contributed to easy access to core technologies, capital, and a wide range of wearable applications – leading to demand for wearable devices on the market. So understanding what most wearable applications users prefer to use, can help investors know where to put their money in for maximum ROI. 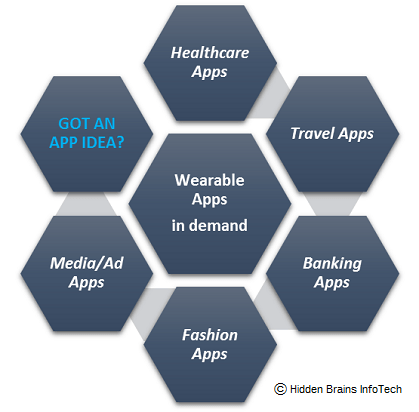 Healthcare Apps : One of the most popular wearable app segment, the app allow users to keep tabs on metrics like steps walked, calories burned and heart rate, besides monitoring treatments and side-effects.

Travel Apps : Wearable apps to facilitate locating places of interest (POI), restaurants and food; including the possibility of contactless/keyless entry for unlocking doors.

Banking Apps : Wearable apps for banking allow customers to check balance seamlessly without taking out their Phones or tablets; or even finding the nearest cash machine.

Fashion Apps: The fashion industry is gradually catching up with wearable technology with focus being on both the look and fit from smart clothing to accessories like smart jewelry and gadget gloves.

What Promises do Wearable Technology Future bring in 2016

As we approach 2016, itâs high time for wearable app market to break free from just being confined to building apps that serves as a âsmartâ fitness gadget, but move on to cater to a wider customer base. However, thatâs not that easy as it sounds – especially at a time when people arenât very sure how wearable devices can help them in their life or derive maximum ROI for business.

While GSMA reports suggest that smartphone penetration will hit 2.89 billion globally by 2017, with research indicating that consumers will now look at their mobile screens nearly 220 times a day – an opportunity brands cannot afford to miss out. At the same time, wearable devices are still at a nascent stage, although Cisco has predicted wearable device connections to reach 578 million globally in 2019, compared with 170 million in 2015. Now thatâs encouraging news for wearable app developers!

Time for Wearables to Look BEYOND Health & Fitness Apps

We all know that wearable apps and healthcare form a daunting combination that includes apps for tracking body weight/height, body fat, waist, blood pressure, pulse, cholesterol, glucose and even sleep. Popular wearable apps for fitness are also a great tool to organize lifestyle and activity data into personal projects such as weight loss and distance running training.

However, there is more to wearable tech implementation other than that, which may include advertising, fashion/clothing, travel, banking, etc.; although there are apprehensions as to how mobile advertising industry will react to the emergence of wearable tech – Will the audience be open to view ads on something they wear?

Experts are optimistic that more than the apprehension regarding display of ads on wearable devices, it is âdataâ that will prove to be valuable for brands to leverage these signals and deliver superior, personalized services and products. Wearable tech companies are in fact looking to resolve the key issues so as to enhance productivity. 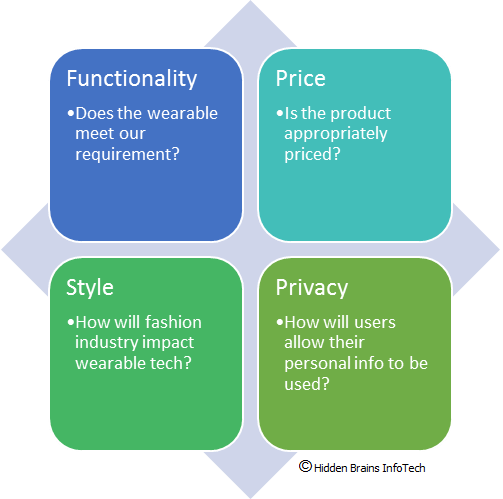 The global wearable market is estimated to grow to $11.61 billion by the end of 2020 at a compound annual growth rate (CAGR) of 24.56%. But what about the apps? In an era when there is an explosion of wearable devices, there are not many wearables to fulfil the demand of the market (as compared to other app in app stores) – perhaps one of the key reasons why wearable devices are not really able to go full throttle as it should have.

Even though the level of wearable app use is nominal in the recent times, research analyst firm Gartner is predicting an explosion of mobile apps, where wearable devices is set to drive almost half of the app development requirement by 2017. It is interesting to note in the study by Accenture, 46 percent consumers are interested in buying smart watches, while 42 percent show interest for internet-connected eyeglasses.

A much debated topic in the wearable tech industry, innovators are looking out for alternative forms of energy to power wearables. Just customizing a cellphone for your wrist do not make it a wearable. Again, tech and fashion âdo not go togetherâ is proving to be an absolute myth, because the computing that reinforces technology is all about things that can be assessed and defined – while fashion focuses on the indefinable and the instinctive, like how things look and feel.

So, as the world discusses the pitfalls of making tech wearable or the pros of enabling wearable devices with tech,  some of the most notable innovations you can see include Tommy Hilfigerâs wearable tech inspired clothing with solar cells that helps charge devices, and Peltier Ring that utilizes body heat to power small LED lights on a ring.

One of the valid reasons that is stopping wearable technology to take the big leap forward is the dual confusion in consumerâs mind regarding functionality vs. desirability. While many tech-savvy people would love to have a wearable device, the responses are fairly divided.

2016 is the year that will possibly ascertain the future of wearable app development. Itâs time for businesses to consider investing in wearable product innovation and build ecosystems that connect wearables to the wider spectrum of interactive digital networks. In short, going by the trend reports discussed in the article above, wearables market success will be driven by enterprises that will incessantly put consumersâ needs first.

At the same time, it is important for companies to reflect why consumers would want technology connected to their bodies and how it could enhance their lives. Not to forget the importance of ascertaining information accuracy and device stability into the overall experience. Letâs hope to see companies take the first-mover advantage in successfully creating beautiful, intuitive wearable devices and innovative applications that consumers will want to buy.

Do you have a wearable app idea? Weâd love to hear it. Get in touch to make your idea a trendsetter in 2016.