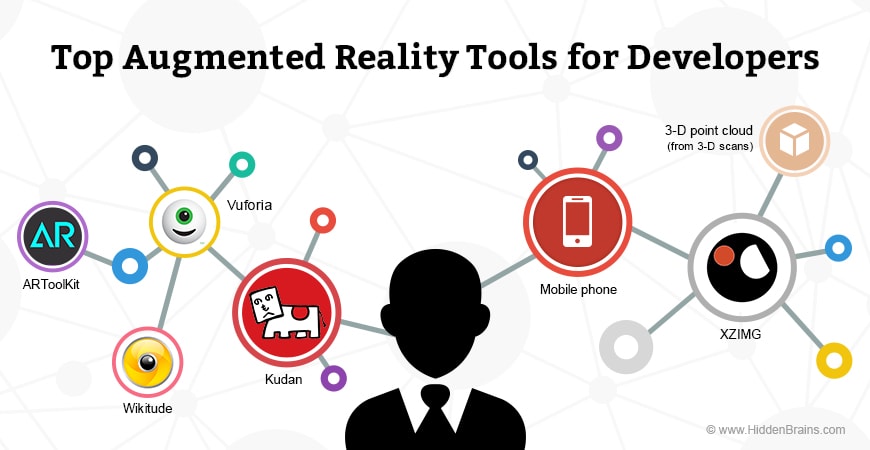 Augmented reality is the new buzzword that it creating waves across the world. With the success of Pokemon GO, Augmented reality is now mainstream. It is no longer the technology limited to sci-fi movies. Each and every industry is now adopting augmented reality to improve effectiveness, streamline operations, increase productivity and customer satisfaction.

There are several Augmented reality tools that help developers to add complex functionality and features. However, each AR framework comes with its own specific features.

There are two main categories where Augmented reality based apps fall into. You need to choose the right category before getting into the application development phase. The two broad categories are: location apps and marker-based apps.

Marker-based apps are basically inclined towards image recognition. With use of black and white markers as triggers, these apps display the AR content to users. In order to view the augmented component, you simply need to point the camera on a marker’s position anywhere around you. As soon as the device recognizes the marker, an app overlays the digital data on this marker and you can see the augmented object.

While building a marker-based app, you provide the images or their descriptors beforehand to simplify the process of searching for them when the camera data is being analyzed. To put simply, the objects are already hard-coded in your app, so they are easier to detect. Most of the AR based apps today are marker-based; especially popular in advertising.

These apps do not use any markers to trigger the underlying mechanism. Just as the name suggests, they detect the user’s position with the help of a GPS, an accelerometer, or a digital compass and overlay the augmented reality objects on top of real physical places. One of the most famous location-based apps is surely Pokemon Go.

These apps push notifications to the user based on their current location in order to provide them new AR content related to a given place.

Vuforia is the leading AR platform delivering best-in-class computer vision, ensuring reliable experiences in a variety of environments. Considered one of the most widely deployed AR platforms, Vuforia is supported by a global ecosystem of 325,000+ registered developers with 400 app installs across the globe. With Vuforia platform, app can see a wide variety of things such as objects, images, user-defined images, cylinders, text, boxes, as well as VuMarks (for customized and brand conscious design. Its Smart Terrain feature provides a new capability for smartphones and tablets that reconstructs a terrain in real-time, creating a 3D geometric map of the environment.

Use Vuforia SDK to build Android, iOS, and UWP applications for mobile devices and digital eyewear. Apps can be built with Android Studio, XCode, Visual Studio, and Unity.

Wikitude counts more than 100,000 registered AR developers and is a technology provider for over 20,000 AR based apps. Wikitudeâs Cloud Recognition service allows to work with thousands of target images in the cloud.

ARToolKit is a Free, Open Source SDK providing complete access to the computer vision algorithm as well as modify the source code to fit your specific application. ARToolKit is freely distributed for use under a LGPL v3.0 license.

Kudan is developing the link between innumerable devices and sensors called the Internet of Things (IoT) and Artificial Intelligence: 3D Recognition Computer Vision Technology. It provides computers the ability to acquire, process, analyse and understand digital images as well as the ability to map its 3D environment, objects, and understand its location within it.

XZIMG provides Augmented Face solutions to recognize and track faces with Unity, as well as Augmented Vision solution to track planar images with Unity. Its magic face solution is ideal for face replacement and make-up applications.

With MAXST, you get two SDKs: i) a 2D SDK for image tracking and ii) a 3D SDK for environment recognition.
The tool has MAXST Visual Simultaneous Localization and Mapping for tracking and mapping environments. Whenever you track your existing surroundings , the map automatically gets extended beyond the first view along with the move of the camera. You can also save the maps for later use. It also has a feature where you can saving files created with Visual Simultaneous Localization and Mapping to render 3D objects wherever you like on it to create more immersive AR experiences.

The tool also lets you integrate QR and barcode scanning. Along with it, the tool has Extended image tracking and Multi-target tracking, allowing you to track the target as far as the camera can see it and can also track up to 3 images at the same time.

The tool comes with an inbuilt Unity plugin integration.

The SDK allows tracking the phoneâs motion and its position relative to the surrounding objects. It has features where the app can estimate the lighting to adjust it on the virtual objects and understand the environment by detecting the surfaces, their size and location.

It also allows placing texts or virtual objects in a certain spot and sharing them with other app users. The core functionalities work seamlessly with Java/OpenGL, Unreal and Unity.

There are several SDKs that can help an Augmented Reality App Development company to push the boundaries of imagination. Some of tools are available free of cost, while others can be downloaded for fixed time period under a contract. However, it is important to pick up an AR tool that is more effective for your needs. Remember, Augmented Reality is at the forefront of transforming the way industries communicate with businesses and streamline operations.