Which one is better â Hybrid or Native app? 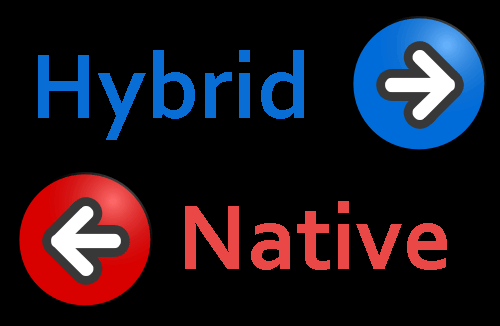 iOS, Android, Blackberry, Windows mobile, etc. are leading the Operating system market these days. These Operating systems are widely used in smart devices like mobiles and tablets. With more than 1M apps in the iOS store, more than 780,000 apps in the Google Play Store and around 250,000 apps in Windows Store and Blackberryâs Play Store, thereâs a great buzz among the business owners to create innovative and exciting apps. The users can have access to 1 operating system depending on the device they use.

Today most of the business owners and developers face the problem to choose the right platform for developing the mobile app. They get confused whether they should develop a native app of a hybrid app. This is surely an old debate which has no perfect answer. Let us understand how native and hybrid apps are different.

Native app:
A native app is written to a specific platform such as Android or iOS. iOS app can be accessed by iOS users only while Android apps can be accessed by Android users. The portability of the code to other platforms is dependent on how it has been written by the developers. It would need some level of rewriting to use it on the other platform.

While writing native app, you would be getting the access to all the hardware features exposed to the native code APIs. One such example is Apple push notification that is an iOS feature and not supported by a web app.

Native apps are considered to be quite expensive and time consuming because one needs to develop an app for a specific store at a time.

Hybrid app:
The major advantage of developing hybrid app is consistency, cross platform UI which is compatible with most of the devices. Hence, it is less expensive method of developing apps. The limitation of hybrid apps is that it cannot be used for all the types of the apps.

Here are some factors that can be used to determine whether you should opt for hybrid app or native app:

Development time and cost:
Hybrid apps take the minimum time for development and they are considered to cost lesser than the development of native apps. When you build a hybrid app, you would need to maintain just one code and native apps may need individual code for every platform. This doesnât mean that native apps are bad. They have their own advantages that make it a preferred choice of many programmers worldwide.

User Experience:
It is considered that native applications offer the best user experience because they are designed exclusively for a single app store theyâre compatible with. The screen size can be adjusted accordingly. On the other hand, Hybrid apps give a good user experience with just one app on multiple platforms.

Paid of Free App:
Native apps have the best UI and so, most of the users develop such apps as paid ones. Most of the free apps can be developed as hybrid apps.

Still confused? Consider all the pros and cons and choose the best option that suits your requirements and budget.

Let us know if you need help in building native or hybrid app.