PHP: Hypertext Preprocessor (or simply PHP) is a server scripting language, and a powerful tool for making dynamic and interactive Web pages. PHP is a widely-used, free, and efficient alternative to competitors such as Microsoft’s ASP. Originally built for web development, PHP is a general-purpose programming language. Data shows that PHP empowers a staggering 79% of all the websites whose server-side programming language we know. PHP Development Company can help you leverage all features to build a high-performance web application. 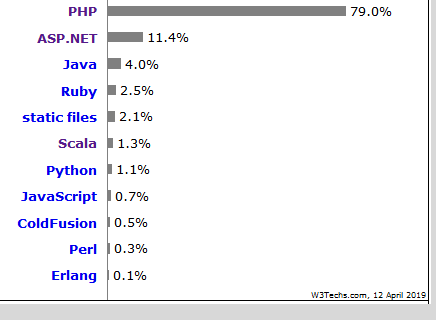 PHP Application Development for the Enterprise

A programming language is an effective tool to develop robust software applications and work towards building an end-to-end solution. It is important to hire PHP developer who can quickly get in sync with the system architecture.

Ever since PHP 5.0 made it debut in 2004, enterprises began to leverage PHP application development. Especially after PHP 5.6 was released in 2014, this assumption is fast changing with huge platforms like Facebook, Vimeo and WordPress now relying on PHP. In fact, developing PHP for use in the enterprise is on the rise.

Why is this? It responds to the following business needs as it provides the architecture that supports robust solutions:

PHP is open source and cross-platform. As a result, PHP allows operation across different operating systems. It works efficiently across LINUX, UNIX and Windows operating systems, as well as interfaces effortlessly with Apache/MySQL.

PHP provides a voluminous support in terms of tutorials and guides on the net and a dynamic developer community providing constant support through forums, chats and more. This strong ecosystem of community makes support for PHP applications and maintenance flawless.

PHPâs role is not just limited to website application development. It has grown phenomenally in the mobile domain. Also, the language is used to build highly feature-oriented, robust and complex apps across different sections.

With multiple extensions, PHP offers the much needed option of scalability for organizations to meet the burgeoning requirements of growing user base.

As a cross-platform PHP tool supporting Operating System of Windows, Linux and Mac, Eclipse comes as the prominent names in the mind of any PHP developer when discussing the most useful PHP tools and IDE.

PHPStorm takes care of all types of inspections while the developer is typing the code. With PHPDoc support, code (re)arranger and formatter, quick-fixes, and other features, developers can write neat and robust codes.

NuSphere is a world-class IDE and state of the art PHP Editor with the power to speed up the developerâs work by 50%.

Zend Studio is a popular PHP tool and IDE that allows developers to code faster, debug easily as well as take advantage of the massive performance gains using PHP 7.

Aptana Studio 3 is among the most robust and powerful open-source web development IDEs. It is high-performance and includes a range of new features to help you become more productive.

Sublime Text is cross-platform source code editor with a Python application programming interface (API). As a proprietary platform, it provides crucial support to many programming languages and markup languages.

Atom.io is a text editor allowing developers to collaborate and work together right from knowledge sharing to building software for macOS, Linux, and Microsoft Windows.

Essential element of enterprise applications is interoperability which allows quick and efficient exchange of information with other platforms. PHP is interoperable and provides a wide variety of interfaces for web services & more. It’s a language to overcome the challenges of web applications without adding a layer of complexity.

Get in touch with our team to build a robust PHP web app. Letâs discuss