Ionic vs. Flutter: Which one Works for you

The key to success in the world of mobility is reaching out to maximum users, irrespective of devices, or operating systems. This makes a cross-platform mobile app seem an added advantage that users on more than one platform have access to your product or service. Ionic vs Flutter share a common vision of creating beautiful, high-performance apps that work everywhere. However, both are inherently different.

Here is a quick comparison between Ionic and Flutter. It is important to partner with an Ionic Mobile App Development company or company specializing in Flutter to gain an advantage. 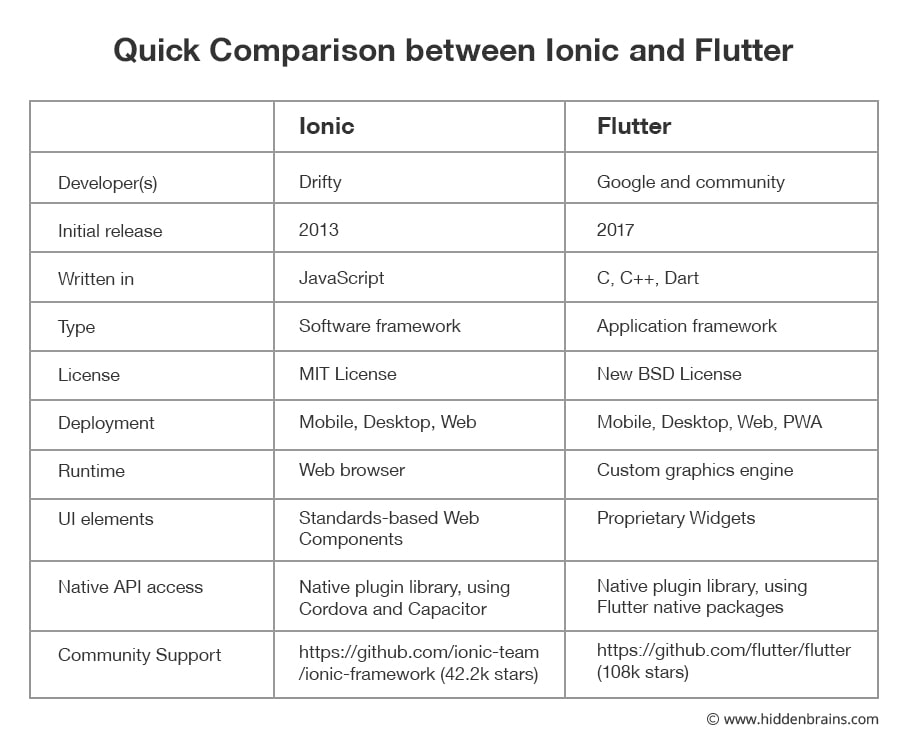 Free and open-source, Ionic provides a comprehensive library of mobile and desktop-optimized HTML, CSS, and JS components for creating highly intuitive and interactive apps. The ionic framework can create hybrid mobile applications for cross-platforms like iOS or Android.

The focus on the Ionic framework revolves around the look, feel, and UI interaction of a mobile application. It features UI components and a rich library of front-end building blocks that allow the user to create and develop a beautiful design, high-performance, and progressive mobile applications with scripting languages like JavaScript, HTML, and CSS.

Flutter is a mobile app SDK to help developers and designers build modern mobile apps for iOS and Android. Google Flutter is a game-changer when it comes to delivering first-rate native experiences. Flutter is growing in popularity and is often compared with React Native and other best cross-platform app development tools.

Flutter is a user interface software development kit to develop mobile applications using a single code Dart. It is integrated with inbuilt Java Code on Android and Objective C and Swift on iOS.

Flutter uses Dart, a programming language exclusively developed by Google. Flutter is relatively new in the mobile app development world, making it less mature than Ionic. However, it is backed by Google and with its dynamic developer community, Flutter is very formidable.

On the other side, Ionic is highly popular among web and mobile app developers due to its easy learning curve. As Ionic is built on AngularJS, several years ago, it has very strong community support in terms of resolving errors quickly and getting regular updates.

However, Flutter has gained market traction and attracted developers to learn Dart, helping developers to build robust native apps with support from the Google community.

Flutter has just made entry into the market but has grown in popularity charts in a relatively short time span. It is used by Alibaba, Hamilton Musical, Greentea, Google Ads, and more.

When it comes to native look and feel, Flutter and Ionic both appear native as far as the user is concerned. Flutter and Ionic update the design of UI elements to match the look of the platform running on such as Material Design for Android and Cupertino for iOS. Both come with the ability to access platform services and native APIs via a library of pre-built plugins with a set of tools to build custom plugins.

Ionic offers a comparatively easy learning curve due to web technologies while Flutter requires developers learning Dart to build apps. Flutter is gradually growing with the support of the best developers of Google and the community. Also, Ionic is used for graphical apps or game development due to wrapper plugins.

Comparison between Ionic and Flutter gets very close when it comes to app deployment across mobile and desktop.

Flutterâs portfolio depicts that you can create some immensely appealing iOS and Android apps from a single codebase.

Everything depends on whether you are looking to deploy your app over the web as a conventional desktop web app or a PWA. Flutter caters to mobile apps and comes with inherent limitations for web browsers. Apps requiring quick load might experience inherent problems in web implementation.

Considering that Ionic is built on the web and fundamentally based on web standards, it gets an advantage when it comes to developing apps for mobile, desktop, and the web.

Ionicâs primary principle is using the web platform and embracing open standards. When you build with Ionic, you will embrace the tools and languages of the web and framework designed to deliver high performance on mobile, desktop, and particularly, the web.

Flutter, on the other hand, has chosen to march ahead single-handedly, creating a self-contained ecosystem that is struggling with the common languages, toolsets, and standards in the more ubiquitous development world. Thus, if you choose Flutter, you will be learning the Flutter way of doing things.

Several key factors such as budget, time, application size, platforms, and so on will play a role when you decide to select a framework for your cross-platform app development.

Want to build a cross-platform mobile app? Get in touch with our team for a new opportunity.