The mobile app development revolution is growing exponentially. To stay abreast of the growing need of the customers and businesses, the optimum utilization of niche frameworks and platforms becomes a must.

For developing a new mobile application for the new business segment, developers need robust technology that makes the time-consuming coding time-efficient and straightforward. Here we provide a quick comparison between Flutter vs React Native vs PWA on different parameters.

A Quick Comparison of Flutter vs React Native vs PWA

This quick comparison of React Native vs Flutter vs Progressive Web Apps (PWAs) will prove to be helpful and quickly identify which framework will be a top choice for mobile app development. 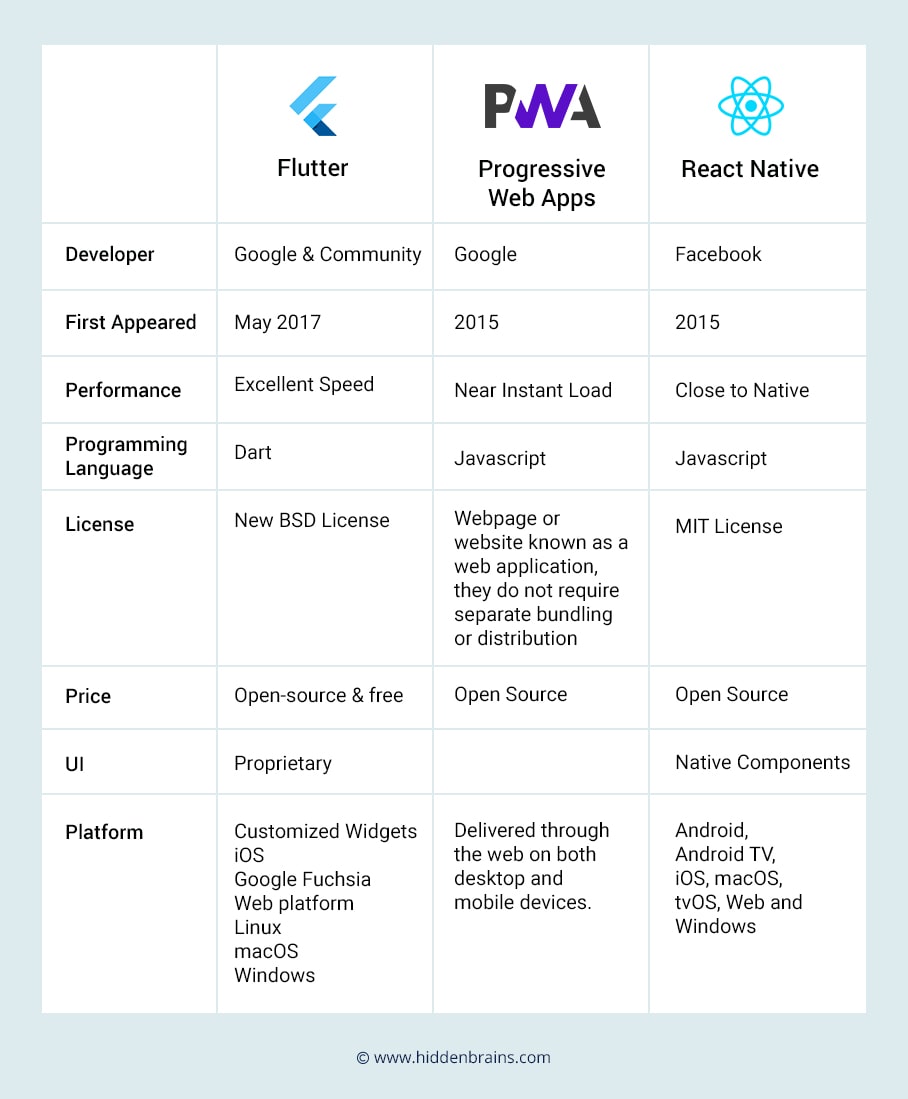 Flutter vs React Native vs PWA â Which is preferred for you?

Flutter is Googleâs kit for the need for application development for different operating systems in Android, iOS, and more. With the Flutter framework, developers can build 2D applications with the ease of fully functional mobile apps with complete support of location, camera, storage, and more.

With Flutter, your application will be developed using a striking layout for different domains in the business. It offers a lot for the developer community, making it one of the preferred frameworks for the development of mobile applications. Right from high performance to intricate graphics, Flutter comes across as a one-stop solution.

Introduced by Facebook, Reactjs is an open-source JS programming language. This language comes across as the most preferred solution to building applications for multiple platforms. You can quickly build application build for both iOS and Android platforms with ease.

Just code once, and the React Native apps help to save development time. With a set of components for both iOS and Android platforms, React Native is a framework building a hierarchy of UI components to create the JavaScript code.

This app development framework is a perfect alternative for hybrid or native application development platforms. The applications developed in the framework are not at all hardware-centric and budget-effective as per your needs. It is a top choice to consider for developing cross-platform and native mobile applications. 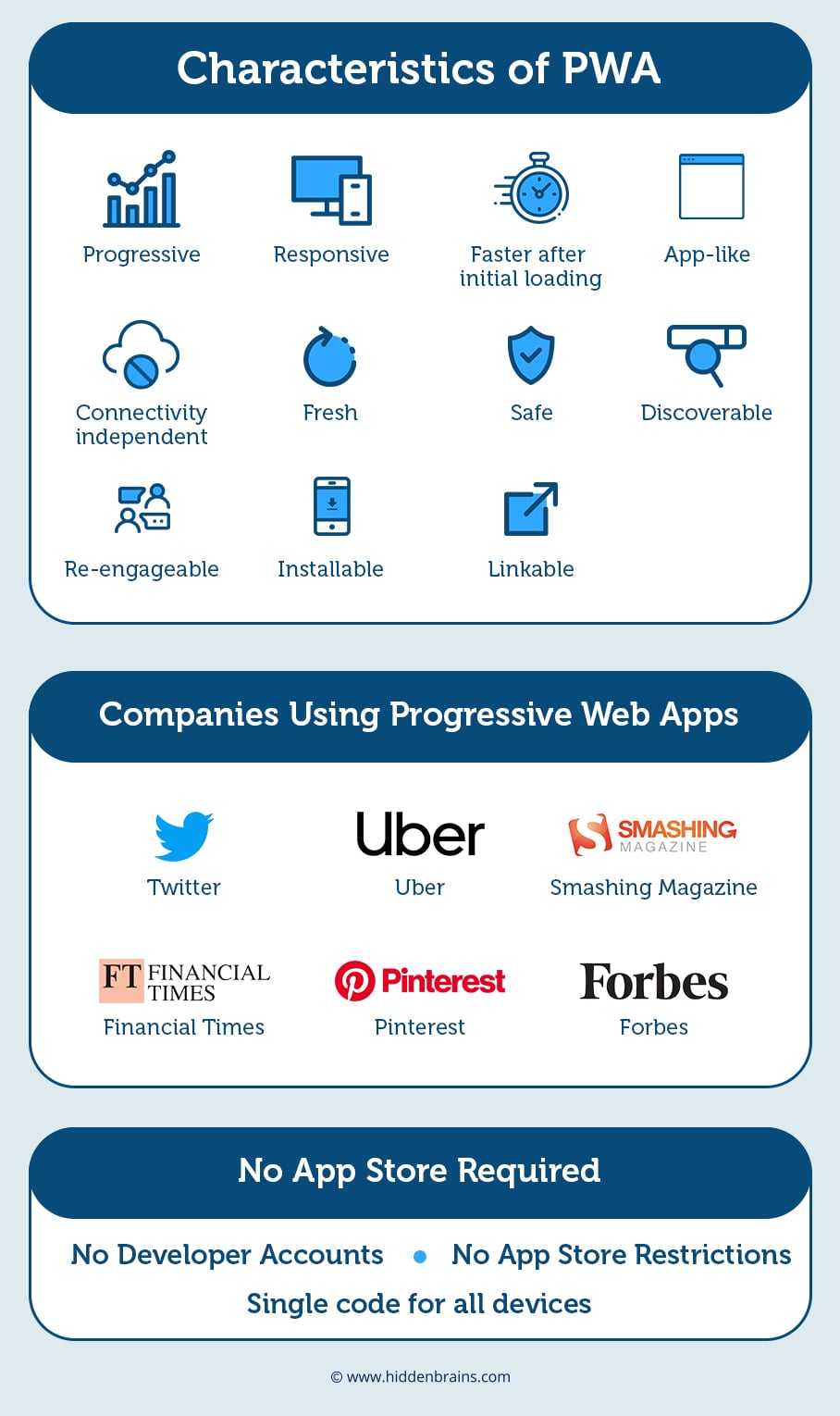 The importance of reaching out to customers on mobile devices is now becoming imperative and a fact.

âProgressive web apps development services allow businesses to obtain strategic goals such as increasing user base and provide enhanced user experience combining the best of both worlds; web and mobile apps. PWAs give users the flexibility of the web with a robust knowledge of a native application. It extends a step ahead of where users can build PWA for mobile and make the app available on all devices. To gain maximum advantage, it is essential to partner with a trusted Progressive Web App Development company.â

Is PWA better than React Native?

React Native is preferred in cases where the aim is to target the Android and iOS devices through the app store. But if you want to widen your reach to users and devices through the browser, then go for PWA. For businesses that want cost-effective development options, PWA is the answer.

Is Flutter better than React Native?

Flutter is simpler and more resistant to the modifications made by the updates of operating systems. On the other hand, React Native depends on native elements of the devices that need more adoption efforts for the iOS and Android applications.

Is React Native a version of PWA?

PWAs are dependent on web technologies to offer app-like experiences to its users. The core languages that make-up PWA are CSS, HTML and JavaScript. React Native apps utilize React.

Hidden Brains is a full-stack award-winning web application development company with a track record of delivering 4000+ web application development projects successfully to our clients from all over the world. We cater to the needs of B2B, B2C, CMS, and eCommerce portals. We understand each business is unique with its own set of challenges and requirements which we fulfill accordingly. Based in India, Hidden Brains offers cutting-edge technological solutions through its next-generation web applications.

As we have talked about flutter vs react native vs PWA competitive analysis in the above content, let’s take a quick look at companies using them. Instagram is an app build with React Native having unmatched product infrastructure. Next is an app build with Flutter, one of the best examples are Google Ads which is an online advertising platform. It develops mobile applications for users using Flutter.

Examples of apps built with PWA include Uber which is an American ride-hailing corporation. It uses PWA for the best desktop experiences and app performances.

React Native, Flutter, and Progressive web app development come with a suite of features. It entirely depends on your business goals and technical expertise to select the framework that best meets your needs to create exciting apps.

If you are looking for mobile app development solutions, get in touch with our team of experts.