Features and Quick Comparison between Deno vs. Node.js

Want to know more about Node.JS and its advantages in building powerful web applications?

The recent release of Deno v1 is creating a buzz. Several proclaim Deno to bring about the end of Node.js.Is Deno faster than Node? However, at this moment, it sounds like an exaggeration or an over-emphatic statement. The comparisons between Deno vs node.js are bound to happen. After all, the creator of both Deno vs Node.js happens to be the same person, Ryan Dahl.

If you want to understand the difference between or decide whether to opt for Node.js, partner with Node js application development company.

Deno is a runtime for JavaScript and TypeScript based on the V8 JavaScript engine and the Rust programming language.

Node.js allows seamless access encompassing filesystem, outgoing requests, environment variables, and more. While it is indeed a privilege to avail of such access, there is also a flipside. This unrestricted access opens up a world of risks during the development or coding process.

Ever thought of rising above the clutter? Node.js provides npm to manage your packages. However, Deno lets you directly install packages from the URL or directly use them by importing packages as a library in the script from the URL. This eliminates the âpackage.jsonâ file for managing dependencies, as well as the ânode_modulesâ folder.

This is one of the biggest advantages of Deno. But how does Deno manage dependencies? It is simple by allowing you to require modules from anywhere.

There is no need to have your own centralized repository. This is one of the biggest differentiators; however, it is controversial also, since importing modules from 3rd party sources increases vulnerability.

Ever since the first version of Node was launched, JavaScript has continued to evolve and improve its library. On the other hand, Deno comes with tall claims of having a complete standard library for developers to use official tools for basic functions and external libraries for complex tasks.

Since the time when Node.js was created, the standard for JavaScript modules was CommonJS, supported by npm. Since then the ECMAScript committee has formalized a different standard, ES Modules, which is supported by jspm.

Deno modules can be hosted anywhere in absence of a centralized repository for third-party modules as well as cached and compiled locally, which means it is not updated unless asked for clarification.

This quintessentially means you can run Deno programs already on your laptop with all imports (needs to be resolved once).

According to Dahl, the founder of Node.js and who designed both Node.js and Deno, Node.js comes with few design issues. Deno fixes all three problems. The core issues highlighted include: 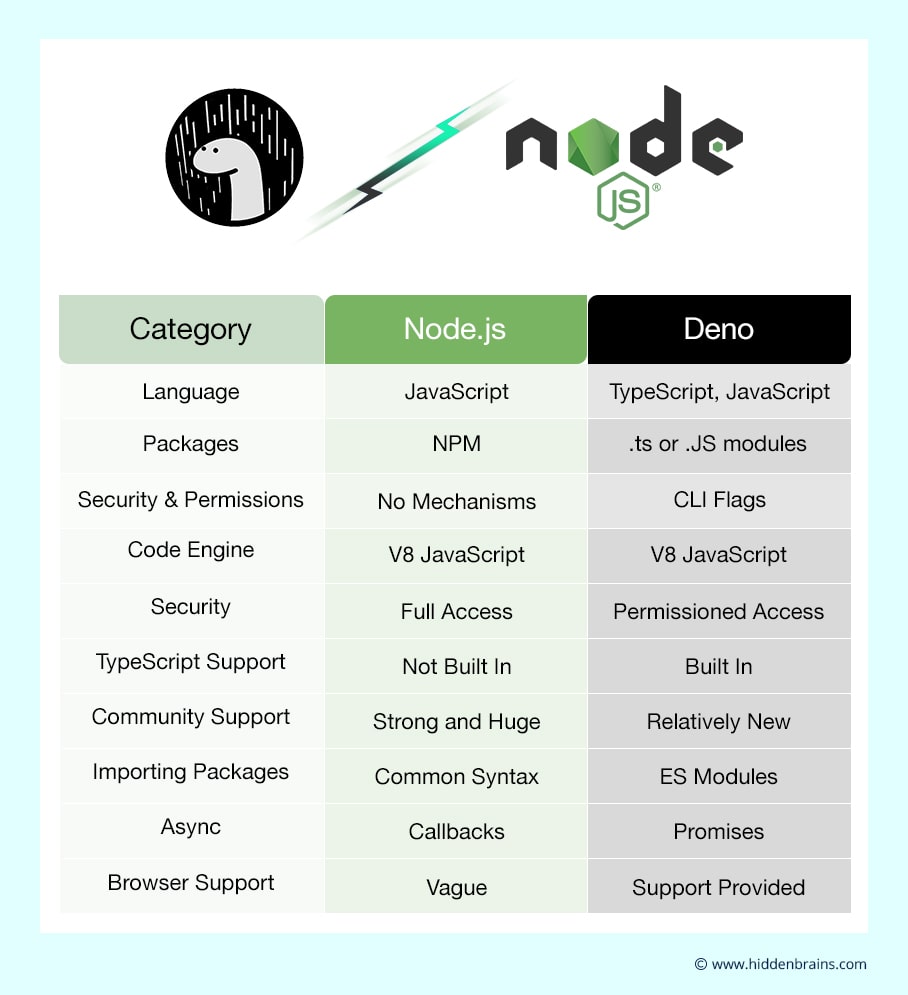 Will Deno replace Node.js? Is Deno faster than Node?

Maybe or maybe not. Node.js has a strong and huge ecosystem of developers. On the other hand, Deno is in its nascent stage and will take time to catch up.

At this point, Deno is a cool new environment for building small private scripting projects in TypeScript. According to Dahl, Deno will never really challenge the success of Node.js considering its popularity. Nevertheless, once Deno matures it may become a viable choice for building larger projects.

Should we use Deno instead of Node.js?

Here the aim of Deno is not to become a Node replacement but instead an alternative. Most of the Node.js developers are content with its evolution and do not seek to switch up things. As Deno focuses on security and building of entire codebase in a single file, there comes an opportunity for Deno to be a go-to tool for JavaScript developers. It also includes the creation of utility scripts that on the other hand may have been written in languages like Python or Bash.

Which is faster in node.js vs deno?

Deno has better performance in c100 test, which implies Denoâs performs well in a higher traffic networks than node.js. On the other hand, Python and PHP perform slower than deno and node.

Is Deno a framework?

Deno has been introduced newly and there are many frameworks underdeveloped to a point where they are unable to support automatic code generation, Open API integration, contract-driven development, validation mechanisms, etc.

Deno which is a newly written implementation is a novel runtime that executes JavaScript and TypeScript which are now inside the web web browser. Know that Deno is not Nodeâs extension. Just like Node, the popularity of Deno is increasing.

State the purpose of NodeJS

The purpose of Node.js is to merge event-driven programming with the web servers, which eventually leads to the fast development of web servers in JavaScript. It enables the developers to create servers that are scalable without the application of threading. They just apply the simple model of event-driven programming. It utilizes callbacks to inform about task completion.

Hidden Brains has been a leading IT company for all types of mobile and web applications development. With years of experience and expertise, we not only develop alluring and result-driven solutions but at the same time mobile and web solutions that have an aesthetic appeal to the user. We understand that every business has unique goals and requirements and likewise develop customized solutions that fulfill all your business needs.

Only time will tell whether Deno will pick up. At the moment or in the near future, Node.js is the way to go and if put in the words of Ryan, “Node is not going anywhere.” When we compare Deno vs node.js, the former emerges as an interesting project. Presently its stable version is available in the market and more are to be introduced in the market.

For example- the developers are working towards improvising the TypeScript compilerâs performance. You can witness them in the coming months. What makes Deno a go-to technology is the compilation of ideas like TypeScript and its browser-compatible modules.

Looking to build a robust web application? Get in touch with our team.