Everything you want to know about React Native Development

What is React Native?

React Native is an open-source JavaScript-based mobile app framework to build native mobile apps for Android, Android TV, iOS, macOS, tvOS, Web, Windows, and UWP. In addition, the framework to create an application for various platforms by using the same codebase. As a result, companies save resources and time involved in developing applications for different platforms. If you are looking to create react native applications to reach out to users across platforms, this blog will provide some quick insights. Further, it is important to partner with React Native Development Company for optimum results.

React Native is growing in popularity: Future & Beyond. 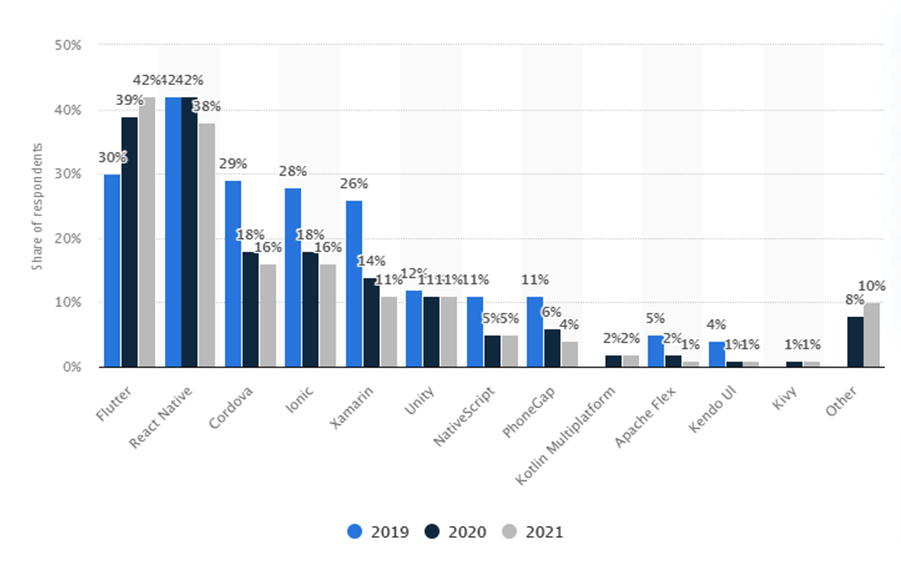 React Native translates markup to real, native UI elements, leveraging existing rendering views based on the platform. Since it works differently from the main UI thread, your application can maintain high performance without compromising quality.

This effectively means for developers familiar with web technologies; you can write mobile apps with the performance and feel of a native application with familiar tools. React Native signifies an improvement in developer experience and cross-platform development potential.

If you are looking to create React Native applications, here are quick steps to follow.

This applies to you if you are new to mobile development

The easiest way to kickstart is with Expo CLI. But what is Expo CLI? Expo is a tool built around React Native with a suite of features that allows writing React Native applications in a few minutes. It requires Node.js, phone and emulator. For those trying React Native directly in a web browser, you can try Snack.

If you are adept with mobile development

You may want to use React Native CLI, requiring Xcode or Android Studio to get started. It takes just a little more than an hour for installation and configuration.

To get started with any app development project.

You need to create a project that you have already generated by using the CLI tool. Now, the next step is to gather the components to build an app.

Components are the visual elements on the screen in a React Native App. When you partner with a trusted React Native app development company, you can easily overcome this step. However, we have covered the major components available to use by the React Native core.

Components for listing the products such as Flat list and SectionList.

React Native allows developers to maintain the app and upgrade with more flexibility and ease. Moreover, the reuse of the modules that work across web and mobile APIs just accelerates the app development process. If you are planning to build robust apps, donât reinvent the wheel. It is important to partner with a React App Development company. Here are the important questions to answer before you hire React developers.

What’s the Difference Between React and React Native?

The difference is pretty straightforward. React is used for web apps and React Native to develop mobile apps. The main factor is that React is a library for web development on the other hand, React Native is a platform.

When to Use React Native?

React is the most feasible option when you want your apps to work on both Android and iOS operating systems. However, you want to keep one codebase only. Although React Native is gaining maturity and improving in terms of performance and robustness, it is providing a seemingly close experience to the truly native experience; there are still many differences.

Can Existing Apps be Migrated to React Native?

Does your app depend on heavy computing tasks on the device? The answer to this question will make things clear. React Native is evolving and growing at a rapid pace to build more and more rapid applications. Also, React Native migration makes your app easier and cost-effective to maintain. After all, there is only one codebase for both Android and iOS.

What are Different React Native Technologies?

It’s good to know that several alternative technologies aspire to provide the same goals and have different ways of doing it. Here are some examples:

What is the difference between React and React Native?

Will React Native apps work on mobile or the web?

React Native is a platform-independent solution that can be used to develop Javascript applications. Mobile apps developed with React Native are considered cross-platform because they are built once and can be used across multiple platforms such as iOS, Android, and the web. React Native for the web is used to build apps that run on true web browsers and like true native mobile apps on iOS and Android.

Why choose React Native over iOS or Android app development?

What types of apps do you build with React Native?

Social media giant Facebook is one of the best examples of apps using React Native. Facebook Ads Manager partnered with React Native for the first time. Besides Facebook, Instagram (which also works with Facebook), Pinterest, Bloomberg, UberEats, Walmart, Tesla and many other well-known companies use the React Native framework for their apps.

What are the best tools for React Native?

React Native provides many tools that play a key role in accelerating application development and making the developer’s job easier. These tools can be divided into two categories, as described below.

React native is growing at a rapid pace. If you’re looking to build a robust, scalable, and secured application partner with the best React Native App Development Company, undoubtedly, React Native offers a suite of features to build and grow your applications.

Looking to build a React Native application for your business?