Want to reach out to a wider audience? Check out our cross-platform mobile app development services.

It has become a point of debate to choose the right technology to accomplish objectives. More and more organizations are adopting cross-platform mobile app development services to build mission-critical mobile apps to expand the business.

Sponsored and developed by JetBrains, Kotlin is a programming language that runs on the Java virtual machine and can be compiled to JavaScript source code or use the LLVM compiler infrastructure. After being endorsed by Google as the official language for Android Studio, Kotlin has consistently gained popularity.

Backed by JetBrain, Kotlin is responsible for creating the best IDE tools. Kotlin provides phenomenal support in a different development environment such as Android Studio. Selecting Kotlin app development for your Android project provides support across multiple tools and IDEs.

Kotlin code is not only precise and concise but also has an extremely clear codebase. That leaves fewer chances for errors and allows stable code in production. You have to write fewer lines of code to achieve the same functionality. 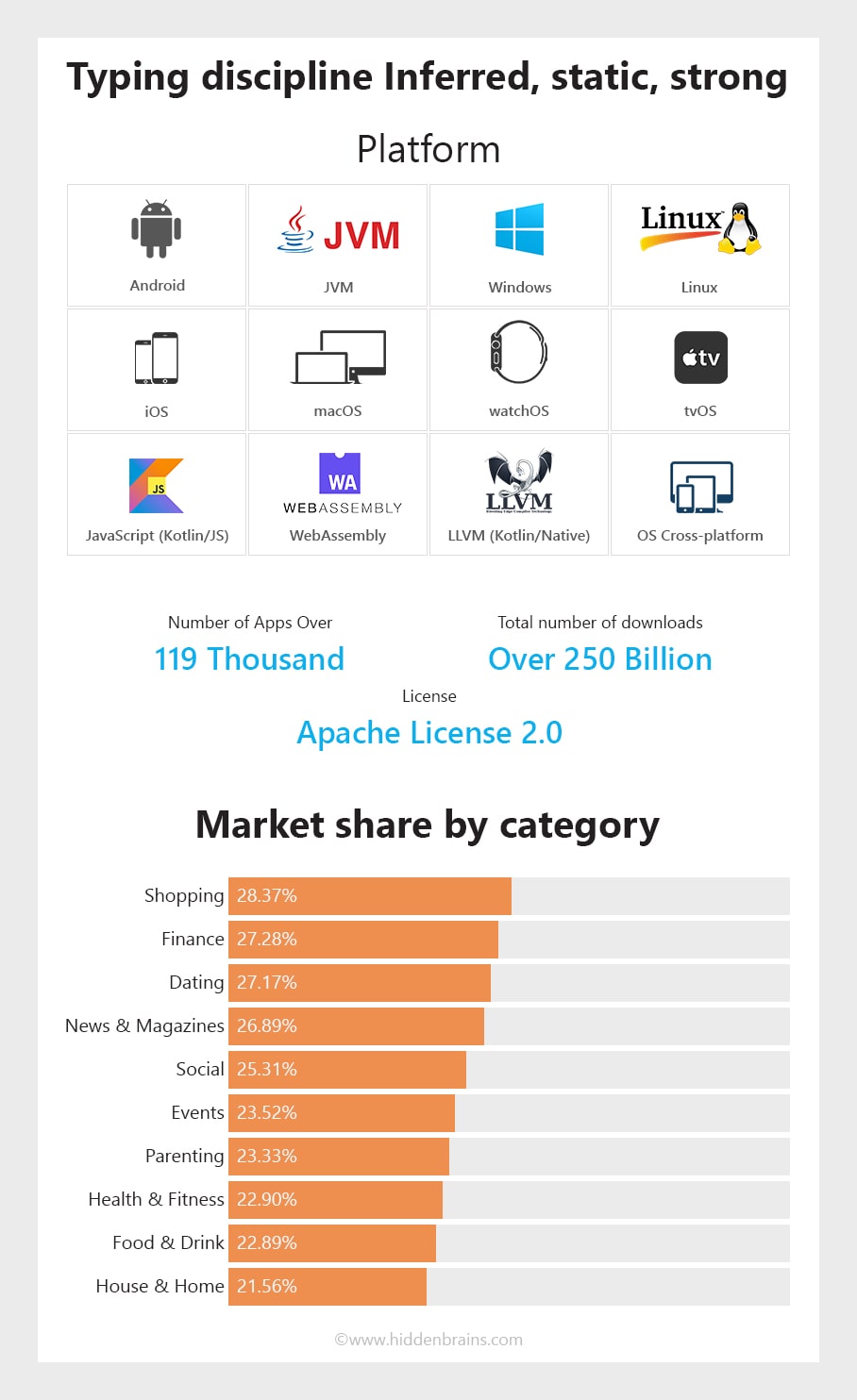 Ever since Google endorsed Kotlin, this language has witnessed phenomenal growth and evolved in terms of providing stable support through different levels of testing before the final release.

Android fragmentation is one of the biggest problems faced by programmers. Kotlin, a programming language developed by programmers helps overcome several issues. Its reverse compatibility with the previous versions works as a blessing.

Kotlin is concise and requires less or fewer lines of code for any given functionality. In simple words, fewer lines of code minimize the chances of errors, improving maintainability and readability of code. This means Kotlin developers can write, read, and change code effectively and efficiently.

Java interoperability adds to the list of advantages of Kotlin. The language works flawlessly with Java, including tools and frameworks, which constitute a feature-rich ecosystem.

Kotlin offers a concise coding process to the developers, they can develop the code with few lines only. However, Kotlin improves the readability and helps to maintain code in an accurate manner.

Furthermore, it is easy to write, read and modify the code with less effort. This upgraded technology provides extensive features including smart casts, type interference, and properties that help programmers to build short and concise codes.

This technology is supported by major top brands â Jetbrains and Google. Jetbrains launched Kotlin and they developed it for their own project, so there is no stone unturned. This technology has all the features, which can be integrated. Apart from this, Google also supports it. The best tech engineers enhance its architectural features.

It has amazing features such as Kotlin Android Extensions, its library sizes are optimized regularly by the Jetbrains. The advanced features simply refer to Jetbrains engineers who are putting high efforts to turn this language one-stop Android development platform.

What Are The Pros And Cons Of Kotlin? 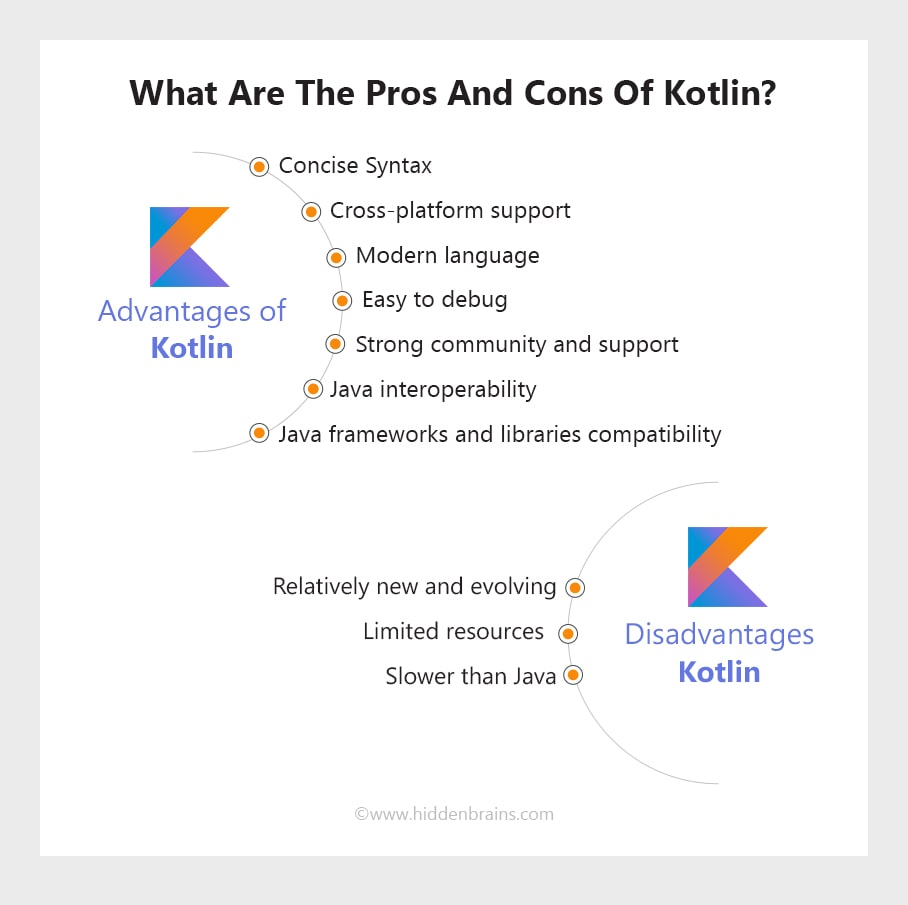 Also, the code can be shared between platforms; React Native makes it easy to develop for both Android and iOS simultaneously. It uses the same design as React Native, letting you compose a rich mobile UI from declarative components. 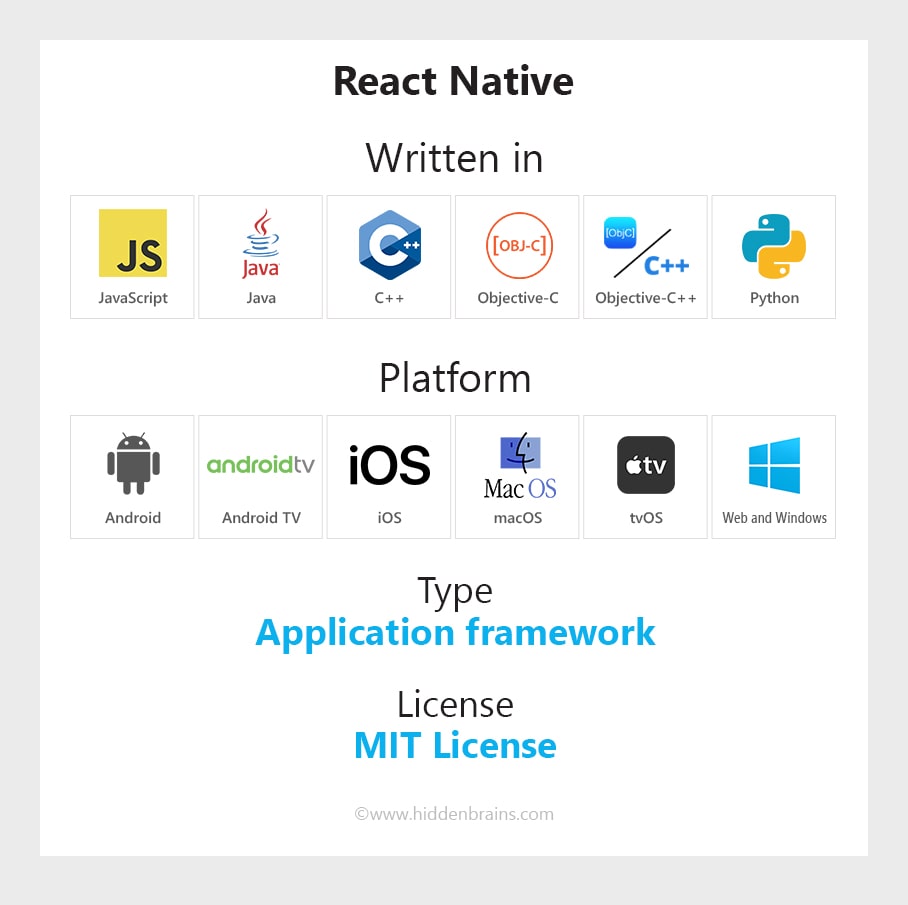 React Native lets you develop a mobile application using only JavaScript. It uses the same design as React, which allows you to build a feature-rich mobile UI from declarative components.

Experts believe that React Native can be considered as the next predominant technology of the React platform. However, this platform helps to deliver powerful apps and it is built as per react based features and ideas. The major feature that attracts developers towards this framework is the live reload feature, which developers obtain in few other frameworks.

This feature allows programmers to experience the latest change in the codes that developers have conducted instantly. However, it can be said that they can see the live results of the code.

Furthermore, in one screen they can put code and in another screen, the results can be reflected. The results can be observed and if required then developers can immediately enhance or improve the codes.

Working with React Native can reduce the requirement of resources needed to build mobile applications. Any developer who knows how to write React code can start developing for different platforms such as the Web, iOS, and Android. This provides the much-needed flexibility to classify developers based on the target platform. React Native lets the team iterate and utilize resources effectively.

React native is based on an open-source feature, which offers this technology the support of developers. Apart from this, it has the best and major tech support as a backend and that is Facebook. Developers can leverage the features of both platforms.

However, an open-source feature helps developers to contribute to the framework and they can alter and modify the code. Apart from this, Facebook also actively supports this framework, which gives reasons to the developers to opt for this framework as they get a wide range of opportunities to leverage the benefits of the advanced features launched by the tech engineers.

REACT Native is an excellent choice for developers with expertise and familiarity in JavaScript as there is no need to learn Android specific Java or iOSâs Swift. This makes the learning curve easier and eliminates the need of maintaining different teams for iOS and Android. Smaller team size effectively means less cost and easy to manage teams.

This framework helps meet the demand of both the platforms at one go and ends the perennial battle of selecting either iOS or Android app development for mobile developers.

React Native is heavily focused on UI which makes quick loading apps and gives a smoother feel. React Native lets you build your app faster. Now reload your app quickly as there is no need for a recompile. With Hot Reloading, you can quickly run the new code while retaining your application state.

What Are The Pros And Cons of React Native? 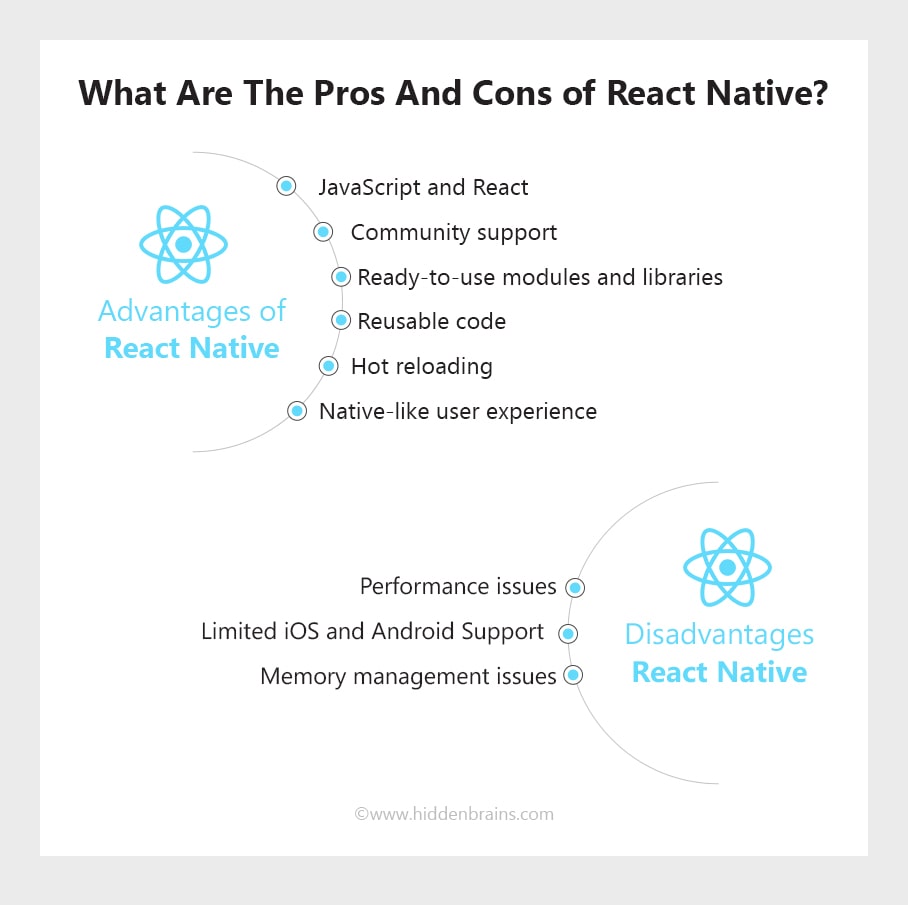 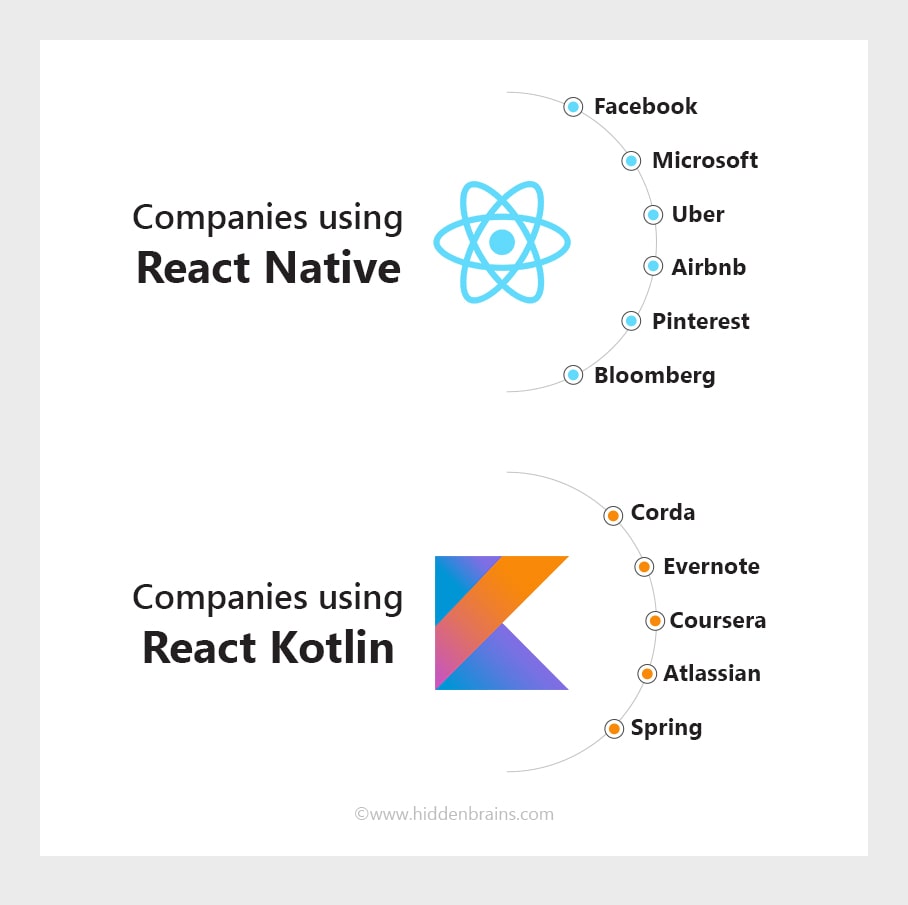 Which is better React Native or Kotlin?

This largely depends on the need of the project. Both the technologies have support of powerful communities and can be used for building cross-platform applications which includes native platform components.

What is preferred for learning-Kotlin or React Native?

With the help of React Native app development you can create iOS, UWP and Android apps with the similar codebase. Kotlin is a cross-platform programming language and can be used in place of React Native, as the former permits the developers to create UI with the use of native standard libraries.

Does this mean the end of React Native?

No, it does not. Being a mature technology, React Native is first choice of Android and iOS apps specifically for fast prototyping and rapid MVP development.

Does React Native have faster speed?

React Nativeâs use on front-end web development was highly popular in 2020, so in 2021 and will be in 2022. Since it has been released, the library of React Native has been dynamic in terms of evolution and improvement.

Hidden Brains is one of the most trusted and reliable IT companies when it comes to web applications development. With a global client base, we are the pioneer in our field. We offer front-end development services for building customized, cross-platform applications and mobile apps. Our users get a seamless experience throughout the stages of the code analysis to the debugging applications. The web applications developed by us have aesthetic appeal and are feature-rich with high usability and scalability. Our greatest USP is to offer simple solutions to complex problems and making them work for your business.

React Native is a thriving community that offers a cohesive ecosystem for the mobile app development sector, as well as access to libraries and plugins to ensure faster time to market. The apps enjoy the intuitive and robust features of native apps without compromising on the performance, all in a reduced timeline, cost, and resources.

On the other hand, Google recommends Kotlin as the standard IDE for Android development. Kotlin is 100% interoperable with Java and offers backward compatibility with Java and Android projects. Kotlin is an enterprise-level language aimed at resolving real-world development problems.

If you are looking to build mobile app to reach out to users across different platforms, get in touch