How Much Money Can You Make from an App

Got an idea for mobile application development for Android or iOS?

In simple words, users experience the same amount of brain activity when interacting with a human or an app. That said, if utilizing or interacting with apps sounds so exciting, how about the thought of developing an app? How much can you earn from creating an app? Does the idea of money-earning apps sound more exciting?

Show me your apps and I will tell you who you areâ, said no one ever. But, let us take the liberty to modify the aphorism. People today feel an equal amount of connection with their smartphones and applications, which they have to do for their fellow humans.

Now, if you, as a reader have ever come across the thought of making money through mobile apps, welcome aboard; you have arrived at the right place.

Now, what exactly will this ârightâ place have to offer?

Whoever told you that the mobile app market is saturated and jam-packed, needs to start living out of the cave. Opportunities and circumstances to succeed are endless in the mobile app world. And, when it comes to making money through mobile apps, it is not as arduous or difficult as you might have imagined.

Mobile applications are as close as anything can get to help you turn your idea into a thriving reality.

Right now, your mind would be gridlocked with questions from all corners of the brain.

Why not answer each of these questions for you right here, right now?

Numbers donât lie: What do the stats say about mobile apps revenue?

When you look back and try to fathom the possibility of how rapidly the mobile app market has expanded, on a scale of â0â to âimpossibleâ, itâs incomprehensible. The total number of hours individuals spend on mobile throughout the day and the percentage of the millennial population spending time on Facebook is already out there in bold. We being consumers too, very well know how much time we dedicate to these smartphones and how they dictate our day-to-day activities.

So, to consider making apps that make you money and start earning from it, what you need to know is this: 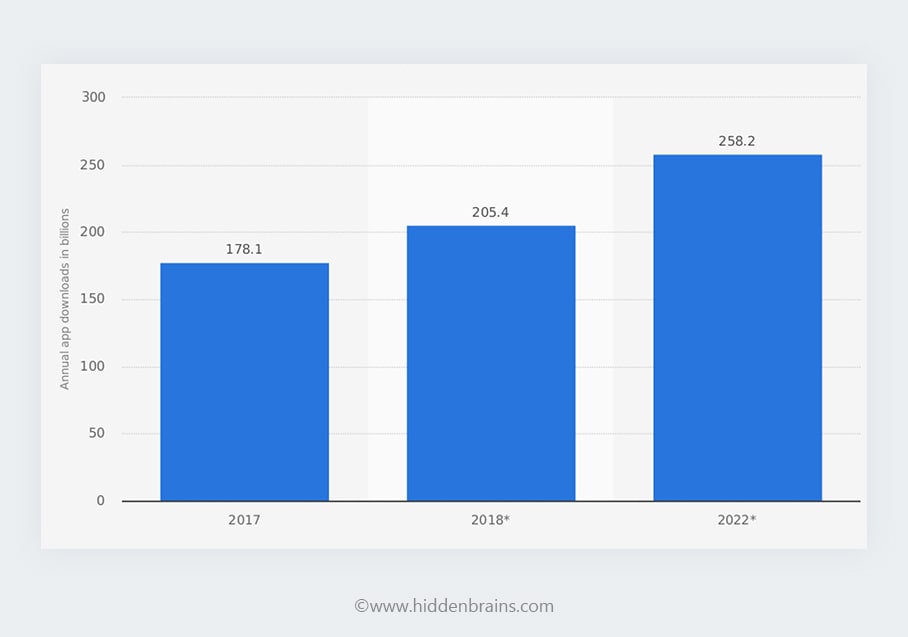 The data predicts that the number of app downloads will rise to 258.2 billion downloads in the next 3 years.

Another research says that, as of September 2019, utility apps had a 96.6 percent mobile reach among online users in the United States, preceded Web browsers at 97.6 percent.

While communication & social media-based apps experience the highest number of downloads, Entertainment and Shopping based apps cover more than 90 percent of the app download market.

With this, we have established the case that getting a mobile app developed to generate revenue is worth it, nay itâs the best investment one can make today. The trick is to consider the money you put into app development as an investment and not as a cost.

What are the types of existing apps and how much money can you make from an app?

It is time to address all the questions bothering us since the beginning. When we talk about applications, they are not just limited to mobile. With integrated smart devices commercially available in the market today, applications, as we know them, have had the luck to feature in a spin-off. The smart television market is expected to register a CAGR of over 16.52 percent, during the forecast period of 2018- 2023. And, as of 2018, 70 percent of the TVs being sold around the world are smart TVs.

Currently, the most popular apps being used on Smart TVs are the key players in streaming media, Netflix, and Hulu. However, if you want to cover a large part of the market and keep your prospects open for the future.

Should I build a free app or a paid one?

Understanding the type of model you will follow and then deciding on how you are going to monetize your app is a big decision. If you fail to make a solid plan on how do you plan on earning from the mobile app, your app idea might just go in vain, and keeping the app live on the store will be like beating a dead horse.

Paying within the app is proving more sustainable with time than paying for the app. And there rests the case. Research has shown that people opt for a freemium model rather than paid versions of the app. People do not prefer to pay for the app before experiencing it.

As an example, Google play storeâs revenue has seen exponential growth over the years. One notable aspect of this growth is that itâs being driven entirely by freemium apps â free to download, but including paid in-app purchases. And this generates 98 percent of all revenues from Android apps and games.

As an entrepreneur, one needs to understand that people are willing to invest their time, rather than money to try out a new app. And if users like your product, they would go ahead and pay for additional services.

Which is the best platform that will generate more revenue from money-earning apps?

Now comes the time to decide on the platform. On which platform will you launch your app? Would you go for Android or iOS? And mind you, choosing the correct platform can largely affect the monetization pattern of your business.

Users behave differently on both these platforms. Android and iOS users are poles apart when it comes to behavioral patterns.

In what ways are they different?

Letâs have a head-to-head comparison between both the platforms and see how they compare when looked through a prism.

When you are making a decision based on the purchase model of your app, between Android and iOS, market research factors like income, location, and education cannot be overlooked.

How Much Can I Earn from Android App

According to one poll conducted between approximately 16,000 smartphone users, Android users are 24 percent more likely to have an annual household income of $50k to $100K.

The research also says that the gap in consumer spends between iOS users and Android users is getting marginally thinner.

Android takes the clean sweep in terms of market share and has the potential to reach a much larger audience.

If we consider personality, Android users are 29 percent more likely to prefer saving their money.

How Much Money Can You Earn By iOS App

iOS users are 67 percent more likely to have an annual household income of $200k or more. Talking about spends, the typical iPhone user still makes more purchases than an Android user.

As opposed to Android, iOS has an audience who is more engaged and more likely to spend on hardware, software, in-app items, and accessories. Also, iOS users are 26 percent more likely to prefer spending their money when compared to its competitors.

Brownie points:â iOS users are 18 percent are more likely to be women.

What are the types of apps that make you money that pigeonholes more revenue?

Choosing the type of app is crucial when you sail out to monetize your application. It is imperative to understand what your users want and enter the market accordingly. Why do certain apps generate more money and why the others are not fortunate enough to even get noticed by the users?

A market, be it any existing system that you take into consideration, in its very fundamental level, works on emotions. Human emotions drive the foundation of any market. In this case, when we are talking about mobile apps: why will someone download a particular app and will they buy the premium services depends solely on the mood and the drive behind an individualâs emotion.

One cannot develop and publish an app simply based on the fact that the idea looks solid on paper and it has the potential to rock the market. When you are an entrepreneur who wants to run a business based on a mobile application, your emotions do not matter. You need to take care of your usersâ emotions, their needs, and their demands.

Doesnât matter if you are emotionally connected with your app idea or not, if your business is not practical and doesnât serve the purpose of solving an existing issue, chances of sustainability in the market are narrow in that case.

When you understand this spectrum, you will understand why certain app categories are successful compared to others. These apps solve the problem for the users. They provide what users demand, what users want. These apps are there to satiate their userâs fundamentally psychological needs and desires. When you touch that part of the human brain, you connect with your users. It gives birth to a sense of connection with your product. 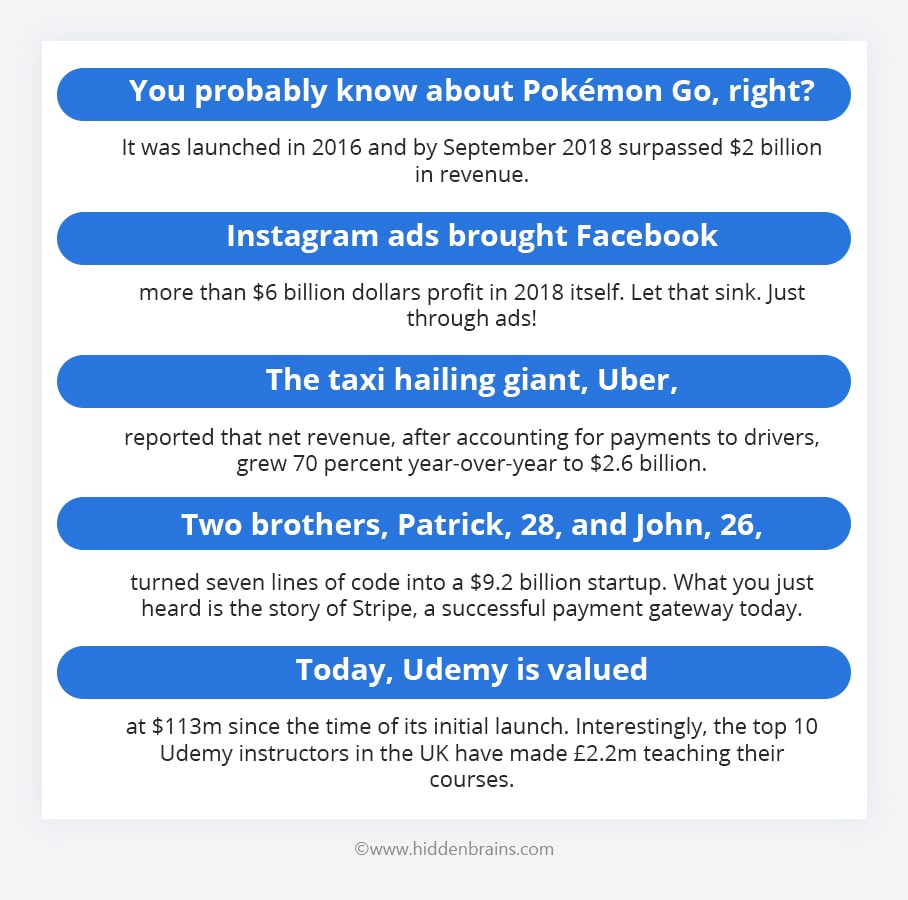 The founders of these apps were as common and as relevant as someone who is reading this post and someone who wrote this post. Did they have leverage? Maybe or maybe not. Just like you and me, even they had started from scratch. Even their idea was first etched on a rough paper lying in the corner today gathering dust. 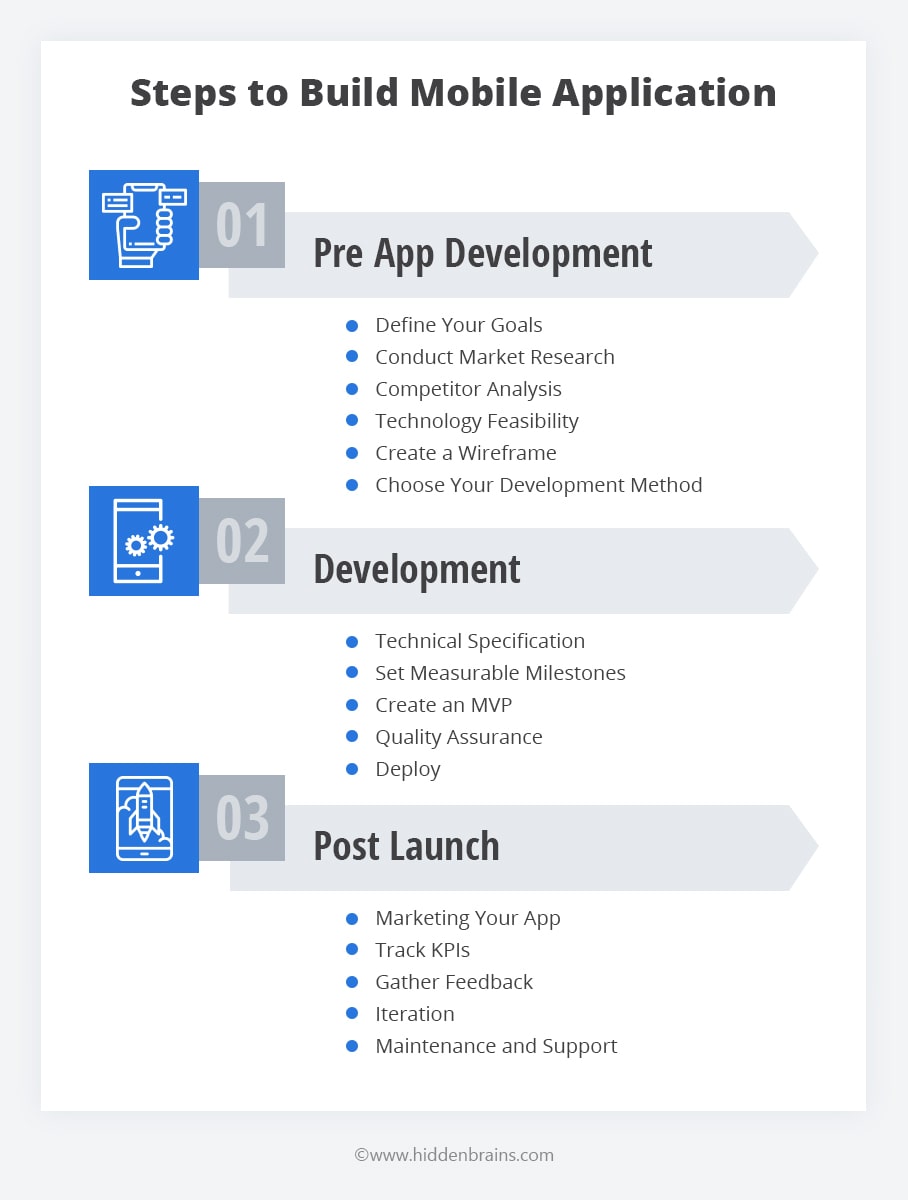 How to Create an App and Make Money

Behind every mobile application, there is a great idea or a problem that needs to be solved. Mobile applications are about addressing pain areas and unimaginably touching peopleâs lives.

To identify problems in your daily life and list each one of them. Once you have a list, then start to think about solutions and build your app around solutions.

It is equally important to finding the need for your idea. This brings to analyze the demand for your idea and validating your idea for your mobile application. There are several tools to validate demand such as Google keyword planner.

Get the idea on paper with flow and features. A bit of detailing wonât harm. Try to envision the flow of the application and navigation structure along with all the features. Wireframing will minimize all glitches in the development stage.

Rise above the clutter. It is important to look closely at features that you can remove and offer only the core value of your app idea. Divide your app features into must-have to go live. This will help you not go overboard with the budget and ensure a quicker time to market.

Partner with a mobile app development company with a team of designers and developers. This will help you get all your requirements under one roof. But donât forget to check the portfolio and client list. This will help you gauge the types of projects and their magnitude.

Once your app goes live on the app store, it is important to monitor the feedback of the first set of customerâs use and get actionable insights into how to improve and enhance your app. Iterations are constant, so keep user feedback as the center point to evolve.

Ask yourself, are you a cook or a chef? A cook who takes the already existing recipe, who just adds the ingredients to prepare the dish. Or, are you a chef who innovates, one who creates something entirely new that the world is yet to see?

Have an app idea? Get in touch.