Open Source Technology Trends 2020 – Whatâs there for you?

Open Source Technology Trends 2020 is set to play a pivotal role when it comes to modern computing, particularly in application development and IT infrastructure. As per Statista Report (2011) Projected revenue of open source services from 2017 to 2022, âTotal global revenue in the open source services market will reach over 17 billion U.S. dollars in 2019 and is expected to grow into a 30-billion-dollar industry by 2022, a number which would represent a tripling in size over the span of just five years. This makes it all the more important to balance risk and reward. 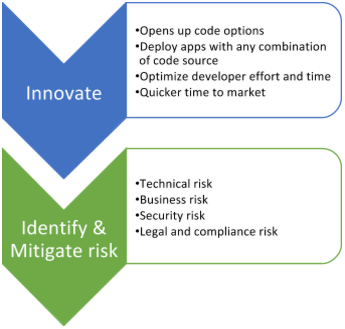 With open source’s rapid rise in prominence, the trends within it remain relatively obscure to the world at large. Although emerging trends has been suggesting MySQL-related open source technologies, it is true that besides the promise of quantum leaps in efficiency, availability, and performance; many questions were raised too, such as â âIf the technologies production is readyâ, âWhat the real benefits are, and the consequent operational challenges it will incurâ.

Open Source being the ground zero for technology development definitely has become the preferred way of germinating hot new technology, particularly for startups. From Docker and Hadoop including their exploding ecosystems to the NoSQL and NewSQL databases, the open source juggernaut is set to sail in 2019.

Open Source and the Cloud Factor

With most IT departments willing to avoid installing and maintaining applications locally when possible, the Cloud is becoming the chosen platform for open source applications. And the trend is not just limited to small app developers; even Microsoft Office 365 is a semi-cloud offering including its chief rival Google Apps.

There is also a growing momentum where Linux is evolving to support an environment in which the ‘computer’ is increasingly a complex of connected systems rather than a single discrete server.

Not only small businesses and application development companies, big Internet companies are in fact emerging as huge open source contributors. Some of the popular examples are MapReduce from Google and Hadoop from Yahoo. Also, worth mentioning is that Google developed the most popular JavaScript framework – AngularJS and contributed groups to the Linux kernel, which eventually became Docker.

Similarly, tech giants across domains like Facebook, Twitter, Netflix, LinkedIn and eBay have each initiated dozens of open source projects. For instance, Facebook is responsible for Cassandra (a leading NoSQL database), and React (a highly popular JavaScript library).

GitHub has fast evolved as the center of the universe for coders (and amateurs alike). As the world’s leading code repository and versioning system, offered as a cloud service; GitHub now hosts over 27 million projects. Although you will find most of the high-profile open source projects here as you would at Apache, the USP for GitHub is its business model – Why code yourself if someone else does it for you, and is willing to share under a liberal open source license? Go GitHub!

Open source security is set to become a major concern after the much acclaimed Heartbleed saga – an error in OpenSSL that put up unaddressed for 2 years, and on discovery created panic; besides the Shellshock bug (also infamous as Bashdoor), is found in the widely used Unix Bash shell.

What makes open source solutions the big fat targets is their rising popularity and ubiquity, which also makes the industry to take notice and collaboratively fund (once woefully under resourced) projects like OpenSSL.

The term open-source software refers to a publicly accessible code that any user can modify and share. Open Source technology is the modern requirement as it offers several benefits.

As the use and popularity of open source has increased, the threat factor has increased due to data breaches such as vulnerabilities attacks. However, this does not imply that enterprises will overlook the benefits. Topnotch companies and large projects concern authorities rely on volunteers to maintain and secure the code so that they donât face any hurdle or obstacle in the future.

Along with this, to be on the safer side and to avoid risks, there are several practices based on a daily basis, which reduces the chances of attacks and turns the software secure.

This is the foremost and basic way to secure the whole data, encrypt your entire data with encoding a message or information. It is essential that this technique should be applied to all data. Along with this, it can be easily applied.

On a daily basis, organizations should automate the testing process to the fullest extent. Testing on a regular basis will help the entities to keep track of the component and enable to detect a bug and failure in real-time.

There are several open-source security solutions, tools, and components to test the software on a regular basis, which helps to turn the software secure and detect the flaws at the initial stage. It helps to deal with the issues easily and prevent entities from huge losses.

The foremost step that entities should opt for is to finalize their business operations requirements. Along with this, the software components are required for the process.

By finalizing the business requirements and components, enterprises can track only those particular software parts which they require for their process. However, it maps the risk areas and saves time for the staff.

To deal with future challenges and attacks, it is essential for the organizations to be prepared in advance. Experts should perform a threat assessment, in which they list the possible cyber-attacks or vulnerabilities that can be held. It will help them to deal with the issues that they might face in the future.

Organizations can opt for advanced techniques such as OSS security. IT helps to prevent entities from the future and risky attacks. In new solutions, developers are integrating it.

Cisco estimates the number of connected devices in use will hit 34.8 billion this year, and by 2020, that number will top 50 billion. But when we say Mobile, itâs not really just about the devices; rather it is about creating a datacenter that is thoroughly secure from many points of entry.

This enables developers to utilize the core features of the iPhone, Android, Palm, and BlackBerry smartphones such as accelerometer, contacts, geo-location, sound and vibration.

In a recent development, Android developers using Visual Studio will now have an open source option. With the introduction of the new Android++, developers writing Android applications mainly in C/C++ using the Android NDK can look to deploy speedy code on Android.

The open source model has always provided us with the flexibility and customization possibilities to provide the client with a user experience and backend functionality that adapts to their specific needs and business model.

Studies suggest that even though enterprise clients would like to go for .Net based solution, for the smaller projects itâs definitely the Open Source. For instance, content management systems such as WordPress, Joomla, Drupal, Typo3, Serendipity, Dotclear, ImpressPages, Chamilo, etc. are set to rule in 2020.

As per Open Source Technology Trends of 2020, open source projects are set to promote software development practices based on RESTful APIs. Not only will this become more instrumental in providing app back-end services and other functionality, even other vendors are open sourcing their own homegrown API-based projects – such as working in the back-end for mobile, Web and Internet of Things (IoT) applications.

Speaking of REST (REpresentational State Transfer) it refers to the primary architectural style underlying the Web, that allows communication over the HTTP protocol with verbs such as GET, POST, PUT and DELETE.

Moreover, with Open API Initiative (OAI) that is formed to establish standards and guidance for how REST APIs are described under the governance of Linux Foundation, the software quality tools company SmartBear and partners such as Google, IBM and Microsoft will work with other industry players to advance a specification for RESTful APIs called Swagger.

Do you know that approximately over 100 million lines of code goes into an average high end car nowadays? Business nowadays have to handle large codebases made up of thousands of developed apps, apart from the different technologies in play – web, mobile, embedded.

Open Source technology is an integral part of application development. So, while you get ready to embrace the usage of Open Source Technology Trends in 2020, you also require to understand that open source is not as such âfreeâ – it comes with its own risks and rewards.

Is your business open source technology READY to lead the way in 2020?