Apple Music, one of the most awaited additions to iOS was announced at the WWDC15 on Monday, 8 June, 2015 along with iOS 9. This much hyped streaming music service will be available from June 30, 2015 for iTunes on OS X and Windows, iOS.

Apple Music will be available on iOS devices, Mac, Apple TV and this very fact signifies its importance to Apple. Moreover, itâs coming to PC and Android too later this year; and Beats Music subscribers will eventually be part of the Apple Music ecosystem also.

The Apple Music app is composed of 3 distinct things, which according to Apple represents the future of the music industry and can bring revolution in music as a service.

Apple music is nothing but iTunes-in-demand. Here you can search in the cloud and stream any song available in the huge library either from music you have purchased and also havenât. Siri with the assistance of a powerful search engine will help you find stuff you love. You can now easily see artist pages, music videos, and unlimited recommendations of new stuff you might want to listen.

Called Beats 1, subscribers can listen to DJs in New York, LA, and London who will be streaming MUSIC to more than a hundred countries around the world. This will be anchored by Zane Lowe, who is the former BBC DJ that Apple hired earlier this year as part of its vision. Jimmy Iovine in his keynote address announced that this product will include music, interviews, etc. and will in true sense be the first global radio station. 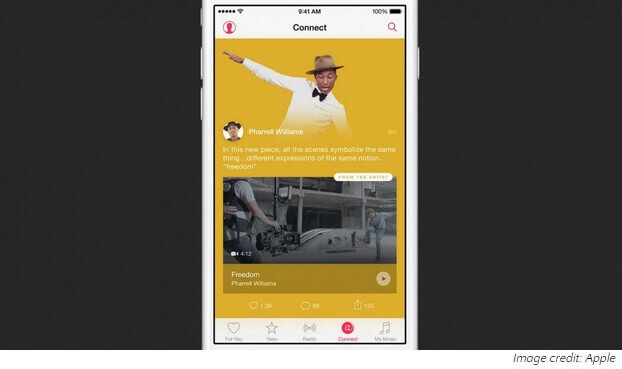 To a great extent like MySpace, Apple Music comes with a special feature called Connect that gives new and old artists a page where they can share music, behind-the-scenes photos and video as well. This is considered by experts as basically an attempt to wrap in a single platform Instagram, MySpace, and many social network artists use.

Apple Music allows you to stream everything available on iTunes. It also offers many human-curated playlists as well as song and playlist recommendations. You just need to tell Apple Music what kind of music and artists you love and it will recommend you songs and playlists, similar to the iTunes Genius feature.

Apple Music, the revolutionary music service holds âpeopleâ as its most vital component. Here, everything from the Beats 1 radio station to the personalized music recommendations are curated and chosen by real, live humans. Iovine does not deny the fact that Apple has a huge amount of listening data; however, it is much appreciated that people are picking your music.

The app has a great UI, and looks enthralling. Not only is it full of images and video, it has lots of information on every page with social buttons just about everywhere you look. All in all, Appleâs ultimate goal is to demonstrate the music you want to hear, picked by people, and connect you with everyone from DJs to artists.

Apple Music comes with a price tag of USD $9.99 or $14.99 for a family sharing plan. If you arenât sure of what the Music app can bring for you, check out the free 3 months trial from Apple.

Get Started with Apple Music

Come June 30, iOS users will find a new software update available on Apple Music. Just download it, and you will find the new Apple Music tab appear on the front screen of your iPhone. As you open the music tab, you’ll see your downloads, categorized by albums and songs, along with tabs for other features like iTunes Radio. Youâll also find the âredâ music tab on the front page of the iPhone turn âwhiteâ.

Moreover, with the new Apple Music kicking in, the computer-generated iTunes Radio will be replaced by the human programmed Beats One Radio, which is a free 24/7 service, curated radio station.

ARE YOU READY FOR APPLE MUSIC?